Hello, my name is Matt Perrin. I am the Guitarist/Vocalist of Bummer. I’m here today to talk about some of my favorite LPs in my collection. I was first introduced to record collecting as a teenager but it really amplified when I started working at Mills Record Company, a local record store owned by Judy Mills in which I worked for around 5 years.

The first LP (not CD) was Slint’s – Spiderland at Slackers in Columbia, MO. I didn’t even have a turntable but I loved this record and felt the urge to buy it. I’m glad I did because it led to me buying my first turntable and diving down the rabbit hole of record collecting.

Some will be surprised that this record isn’t a Nirvana record, and I’m even surprised myself. Though when I look back to my youth it was this record, Gorillaz – S/T that opened the doors to so much more.

I was in 3rd grade when Demon Dayz came out and Feel Good Inc. was on the radio and MTV everyday. I had a best friend at that time named Michael Stewart who absolutely loved the Gorillaz, but me coming from my overly conservative household tried my hardest to hate everything he played for me by them. I wanted to hate it, I wanted to not like any but of it because I was stubborn, but the tapping of my foot to the beat was irresistible. It wasn’t until Michael burned me a CD of 2001’s Self-Titled (which I still own to this day!) that I broke down and completely fell in love with it. Not just the band, but music itself. Gorillaz S/T was moody, upbeat, poppy, with hints of rock, hip hop, soul, latin, and more. It showed me that music could be so much and so little all at once. I also can definitely attribute my love of trip hop because of this record and it’s trip hop roots. This was one of the first LP’s I ever bought as a teenager after I got my first turntable. I own few “full discographies” but the Gorillaz discography is one of them (Roomrunner and Guerrilla Toss being the others)

(This is Rob Crowe from Pinback’s first band. After talking to Rob himself about this record he explained to me the reason it’s a 2 in 1 record is because they couldn’t find the original artwork to be able to size it correctly for individual LPs. Thus doing the 2 in 1 with both CD sized artwork on the front cover. This is one of my favorite gems of my collection that was gifted to my former boss Judy mills when I left Mills Record Company. You can’t find this record on streaming so I routinely keep it very close to my turntable. It’s truly one of those records that you have to listen to front and back).

This is one of my all time favorite records. Muscle Worship was a band from Lawrence, KS (an hour west of Kansas City, where I live) and I will forever consider them the greatest band from KS. It included ex-Appleseed Cast members and their live show is still one of the most entrancing things I’ve ever seen. I’ve had so many memories with this record since I was a teen when I first heard it and the reaction upon hearing the first note is still the same as the first time. Pure joy. This record is beautifully layered and must be played front to back. Every song flows into the next perfectly and the way it captures the tonality and emotion together as one is unparalleled. 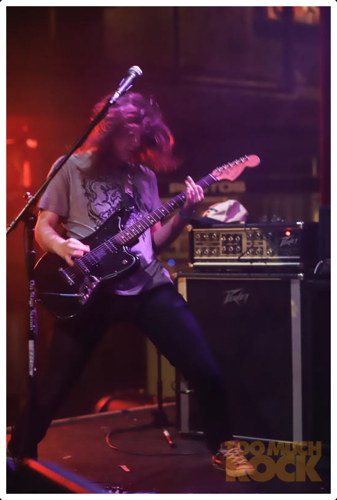 Valium Aggelein is Duster’s side band that they did the same time as doing Duster (Well if you want to get technical, Valium Aggelein came before duster! Fun fact: The song “The Landing” which is track 6 of Duster’s Stratosphere 1998 is actually Track 1 of “Dweller on the Treshhold” 1997). This record “The Black Moon” is a Numero compilation of the group’s only two records (Dweller on the Threshold & Hier Kommt Der Schwartze Mond). It was a tough pick between either this or Duster – Stratosphere, as both of these records mean the world to me. Growing up surfing music forums I discovered the /dust/ forms and mega links that were everything duster. Duster LPs, EPs, 7”, bootlegs, side projects, and other bands. I fell in love immediately. The hauntingly calm stoic guitars paired with melancholy loops and ideas about space travel and low earth orbit. It was truly everything I wanted in a band, but then upon digging deeper in those /dust/ forms and discovering duster’s side band Valium Aggelein did I find an even deeper love of this band’s journey and sound.

Valium Aggelein was Duster’s approach towards more of a “krautrock” based sound, tipping the hat to the great Kraftwerk. (This is very present in the original release of Hier Kommt Der Schwartze Mond released in 1998 and completely in German). It honed the classic duster sound but added in new elements with synths and loops. It is one of the most beautiful records I have ever heard and while Numero isn’t really the best label I do appreciate them compiling both releases and re-releasing them as one. This is the perfect rainy day record. I highly recommend it.

Not only is this a fantastic WARP Records release. The cover art is designed by The Designer’s Republic who also did things like the award winning Wip3out video game series, Aphex Twin and plenty other WARP records stuff, as well as a handful of national ads including Coca-Cola

In 2013, while waiting to pick my friend from the airport. I stumbled upon a live performance of “Operate” by Guerrilla Toss. It was one of the wildest, most abrasive things I had seen in years. I immediately went out of my way to grab the record this track was featured on titled “Gay Disco” (which features a minimalistic yet trippy and colorful front cover, and a two-sided insert with credits on one side and a photo of a naked man in a stairwell on the other side). It’s 6 bizarre, abrasive, no-wave, noise masterpiece filled with a suspicious amount of groove and repetition to keep it interesting. This band is a really fun band to watch progress. They were all music school kids pushing to make the most non-music possible in the beginning but over the years this band added more and more rhythmic and groove elements to completely evolve their musical identity. (Seriously, listen to the first record Jeffery Johnson and then listen to the last record they put out Twisted Crystal. One is a noise record, the other is a straight up funk record). This band continues to be own of the strangest bands I listen to but I have been an avid fan ever since this release. Their favorite release of mine would be the 2017 banger of DFA records titled GT Ultra, check it out!

It depends, I have a couple rarities in my collection still. I recently just sold off some though! The rarest single LP (like rare, and not just Discogs rare) is the original press Christie Front Drive – S/T which I picked up from a Extreme Noise Records in Minneapolis a couple years back. The rarest and most expensive item in my collection through is the Duster – Capsule Losing Contact (Moon Dust Colored Vinyl Edition) released by Numero in 2019

The Kenny Burrell Quintet with John Coltrane 1968 Prestige Reissue with the Purple Cover.

Fantastic record. I grew up playing jazz and I have always idolized Kenny Burrell (Midnight Blue is a personal favorite of mine). My former coworker Mike Lesely recommended this one to me so I picked it up. John Coltrane + Kenny Burrell is a no brainer in my book.

Be the first to comment on "Matt Perrin (Bummer)"