This time around we feature the collection of New York based band Vaureen.

Bad Religion’s Stranger Than Fiction and NOFX’s Heavy Petting Zoo came into my ears around that time too.

I had that Columbia House CD catalog thing for a while around that time, ordering things like Melancholy and the Infinite Sadness, Weezer’s Blue album and the Forest Gump Soundtrack.

I remember albums more in terms of life events or memories of the people who shared the music with me. I didn’t like collecting CDs, they always looked stupid to me no matter how neatly they were organized and I was terrified of scratching and ruining them. I just wanted to hear the music. There were a lot of burned CDs – one kid at school even drew the Nevermind graphics onto the burned CD he gave me. I appreciated his attention to detail, ha! (Fun Fact: he’s now a doctor who delivers babies.)

Napster happened, Mediafire happened, iPods happened. I got a lot of music files as opposed to albums. But I never lost respect for the album form. It was sacred. I was just starting to learn that albums could be taken apart and scattered, if anything, and single tracks to me became like breadcrumbs leading to an album experience.

I didn’t get a turntable until my 20s, and then all I had were my mom’s old records. My favorite one was the Beatles White Album. It was taped together, the tape all yellowed and brittle … clearly it was very well-loved by whoever’s hands it passed through (I was told that she “borrowed” it from someone in college and never gave it back). I loved it too, because the it contained music that was both beautiful and chaotic, unselfconscious – and because it seemed akin to a family heirloom that would need me to keep it safe.

Marianne: I bought Radiohead’s OK Computer on cassette tape at a Sam Goody store in a mall in Houston, Texas. CDs were common then, I’ve just always behind the times. This is still true today.

I got hooked on Radiohead seeing the “Paranoid Android” music video on MTV, and I listened to the tape endlessly in my mom’s car. I eventually got the CD version, and wore that out too. Pretty sure it’s part of my DNA now. 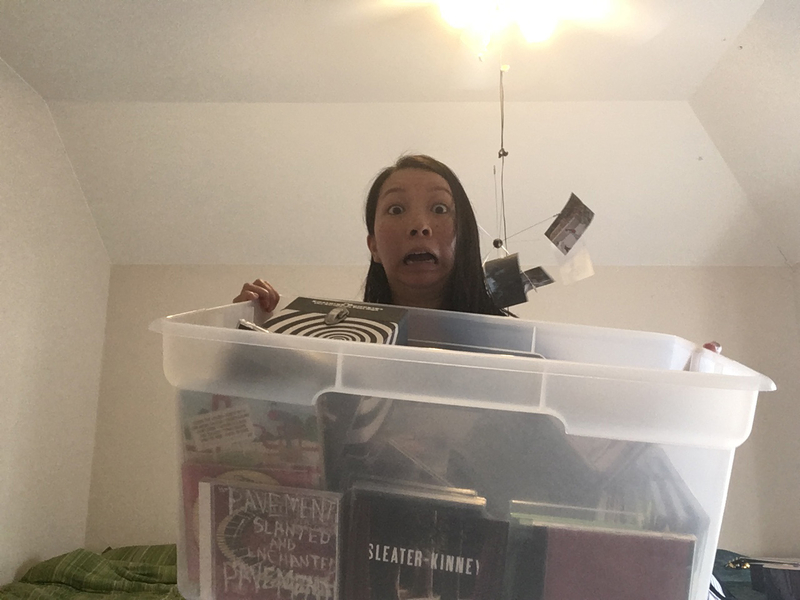 Marianne and her tub of CDs

Andrea: First of all I always wanted to make music and mostly couldn’t help it.
The tipping point came a couple years out of college when a friend gave me Easter by Patti Smith, which led me to Horses. And that was it. I bought a book with all of her lyrics in it that I treated like a religious text on the drive from Minneapolis to Brooklyn.

Marianne: I started to play bass in my teens and practically worshipped Kim Deal. I learned a lot of Pixies basslines as well as the basslines from Last Splash, my favorites probably being “I Just Wanna Get Along” and “Do You Love Me Now”.

Cale: Hard to say… Jethro Tull’s Thick as a Brick had a gigantic impact on me.

Marianne: Lately, Perfect From Now On by Built to Spill. This album makes me think of the phrase “guitar vocabulary”… the guitars are absolutely, overwhelmingly gorgeous without being too heavy-handed. Also, I know first-hand how tedious recording can be and how much can be nitpicked at without end, so when I learned that the album was recorded THREE TIMES, my appreciation of it grew even more.

Andrea: The Life Pursuit by Belle & Sabastian, Baby by The Detroit Cobras, Rio by Duran Duran, Anything by the Presidents of the United States of America.

Marianne: Pacer by The Amps, Washing Machine by Sonic Youth, Come Pick Me Up by Superchunk.

Marianne: This is hard to answer because when I’m feeling down, I like listening to depressing music, which isn’t healthy… But Emergency & I by Dismemberment Plan is a good one. That and Go Forth by Les Savy Fav were probably my two favorite albums in high school so I’ll always have a soft spot for them.

Andrea: Godspeed You! black Emperor Asunder, Sweet and Other Distress. I like how the artwork interacts across the gatefold vinyl sleeve. It tells a story through image and tone that resonates with me. I almost like it more than the music, though it is clearly a continuation of it.

Marianne: Don’t know if this counts, but I always like looking at The Aeroplane Flies High box set from the Smashing Pumpkins. 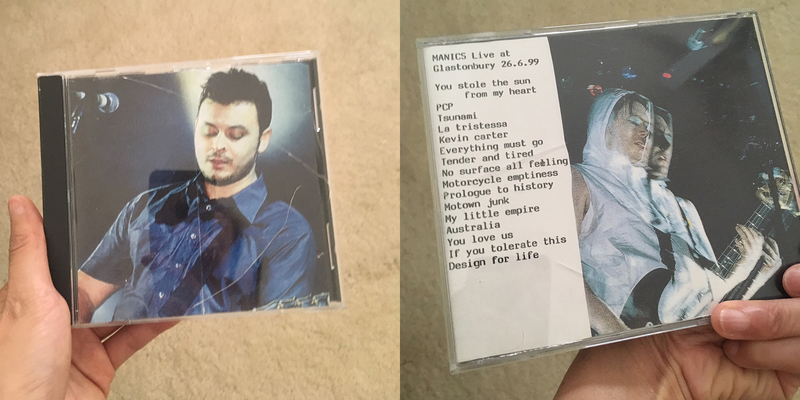 Marianne: When I was 14 and wayyyy too young to be forming relationships online, I was in a Manic Street Preachers phase, and had befriended someone online in the UK who sent me this bootleg CD of the Manic Street Preachers live at Glastonbury ’99. (To this day it blows my mind that nothing bad happened to me as a result of sending strangers my address over the internet…)

Marianne: I bought a CD from a local Houston band called Basses Loaded maybe a decade ago? They’re no longer around, but they were an all-bass band that could really shred. They still have a MySpace page but sadly MySpace lost all music uploaded from like 2003-2015, so I have no idea where to find their music anymore.

Andrea: Marked For Death by Emma Ruth Rundle. Just before that was Crystal Fairy, self-titled. Ask me what I want to buy next. It’s Rocka Rolla by Judas Priest.

Marianne: I honestly don’t remember… but my boyfriend bought me Flaming Lips – Embryonic and Selda Bagcan – Selda on vinyl as a gift, which was very sweet.

Three Bands You Should Hear, Vol. 3